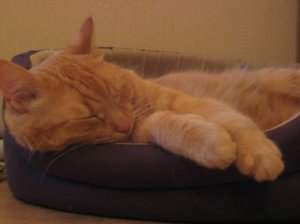 This is Gizmo. He’s pretty rubbish at hunting, unless it’s my legs. He’s good at swiping at the back of them as I walk past. As you can see he can be cute when he wants to be.

At the moment he’s tired from a full day failing miserably to catch any of the birds in the neighbours garden. He’d probably have a lot more luck if he didn’t get excited and make stupid chirping noises while he’s hidden in the bushes.

Gizmo doesn’t get too interested in my cooking, seemingly content with his dry cat food (he’s too fussy about the wet tinned stuff) and the occasional bowl of deluxe cat food as a treat. However he does like the odd slice of ham when making sandwiches.

Writer, poet, musician, and sometime IT professional in the North East of Scotland. View all posts by minceandskirlie

This site uses Akismet to reduce spam. Learn how your comment data is processed.